I forgot about this part of my life when my mom would make huge trifles (bagatelle, as we would call it in Quebec) out of chopped white cake, pudding, whipped cream and fruits. She would make it so quickly, while cooking about 10 other things, and then... boom, hello elegant layered cake. On a modest Tuesday night. Just like that.

Because that's the thing about trifles, they are so-darn-easy-to-make. Pretty much fail-proof. Just break up a simple cake, add a bunch of fruits, some cream/pudding/custardy-like mixture and layer as you wish. Everything soaks and blends just a little together, gets kind of melt-y soft texture. The ingredients hugging each other. Crazy Good.

And now you might think that of course it is so delish. How can it not be with sugary cake and heavy whipped cream, anyway? But hopefully you suspect that there is a little trick under in there.

This dessert is all about the magic power of aquafaba! Aquafaba is simply the liquid from a can of chickpeas. I know it's super odd and it took me (and my sister, who worked hard on this recipe) lots of time to experiment with that weird kitchen hack. But you have got to trust me. Aquafaba makes for the most amazing light mousse texture. Without tasting chickpeas at all. No kidding.

So next time you open a can of chickpeas, why not keeping the juice from the can. And just whip up a sumptuous trifle. Just like that. Even if it's a humble Tuesday.

A trifle is an English layered dessert that's served cold and usually in a see-through container to view its beautiful components.

Also, some classic trifles will include soaking biscuits in an alcoholic beverage first (often cherry) to soften and boost the dessert with more flavor.

It seems like many different kind of desserts will burrow the name of trifle as long as it contains layers of different textured ingredients.

What's aquafaba and why use it in dessert

Aquafaba is simply the juice from a can of chickpeas. Not cannelini, navy, or any other kinds of beans. Just canned chickpeas. The liquid has a slightly syrupy beige & cloudy kind of look. Not appetizing, I know. But just bear with me.

It is an amazing vegan mysterious ingredient to use in baking as it easily whips to a thick and beautiful white mousse. It does a good job at replacing egg whites for some recipes (it actually has a similar slimy texture) and can act just like whipped cream as well if whipped until thick enough.

But what makes it such of a good whip-able ingredient? It's all about the concentrated starches that are accumulating inside the juice of the can.

The starch can easily trap some air when whipped and therefore can create a light, but dense, foam or mousse texture.

And again, somehow after being whipped, aquafaba mousse shockingly doesn't taste chickpeas at all.

What you'll need to make this vegan strawberry trifle

There are 2 parts to making this vegan dessert: a basic simple cake + a pink strawberry mousse. I recommend to plan on having more fresh strawberries to slice and layer them in the mini trifles as well.

For the strawberry mousse

How to make mini strawberry trifles

This recipe is so easy and comes together fairly quick too. The cake can be done ahead of time, but I would recommend to foam the mousse + build the layers maximum 2 hours before you want to serve it.

1- Take a large bowl and add the coconut oil to it. Make sure it is in a solid state and not melted. Then, use a handheld mixer to whip the coconut oil alone for a few seconds before adding the maple syrup a little at the time. You can pour the syrup slowly like a thin stream as you are whipping the coconut oil. This will help break the larger clumps of oil and form a mostly creamy mixture.

2- Then, add the vegan milk and apple cider vinegar (you can go all at once or pour as you are whipping). Whip the mixture for a few seconds until mostly combined. The coconut oil tends to harden a little, but as long as you don't end up with big clumps, it will be fine.

3- In a large bowl, combine the flour, baking powder, baking soda and salt. Then, add the liquid to the flour mixture (use a spatula to make sure to transfer all the coconut oil that can stay stuck on the bowl) and combine using the handheld mixer just for a few seconds. Make sure not to overmix.

4- Then, transfer in a square dish (8x8in) that's covered with parchment paper and bake for 21-22 minutes or until slightly golden brown on top.

5- When done, let the cake cool down in the baking dish for about 10 minutes, then take it out so it can completely cool down.

6- Once cooled down, simply cut the cake in the desired size squares.

1- First, drain the can of chickpeas in a small pot and set the chickpeas aside for a different recipe.

2- Warm the aquafaba until it starts to boil and let it simmer, uncovered, for 5-7 minutes. You should start with about ¾ cup and aim for about ⅓ cup after simmering. Watch carefully so it does not burn. Then, let it cool down for a bit (this is when I usually clean and chop the strawberries).

3- Then, transfer the aquafaba in a large bowl and add the lemon juice and maple syrup. Then, using a handheld mixer, whip it for about a minute. It should start to foam and get white-ish.

4- Add the strawberries to the aquafaba and keep vigorously whipping the mixture for 5 minutes (put a timer and don't stop before it goes off!).

This is when the fun really begins. Start by adding some of the mousse to the bottom of the serving dish, then a few squares of the cake, layer some strawberries and repeat.

That's the thing with this dessert, it simply does not store well. With time, the aquafaba mousse falls, the cake soaks on it and the strawberries aren't as fresh as they were, so you will lose the foamy layer as the time goes. The flavor are actually amazing after the soaking effect, but it won't have that stunning fresh look after a while.

So, what I suggest is to make it just when you need to eat it, or maybe an hour before serving. If you build individual portion like I did, then it is perfect as you can make the cake and foam the mousse, then serve the exact amount of servings you need, then store the leftover cake + mousse in the fridge covered and apart from each other. In this case, the mousse will separate with time, but simply whip it again for a few minutes to recreate the mousse, then serve again.

I love serving them in mine trifles, but if you have a large trifle dish, then this would also work beautifully. But, you don't even need a fancy proper looking trifle container to serve them, simply use a glasses and layer the ingredients inside.

If you prefer, you can also simply cut the cake in larger 1-person square size, place on a plate, then add a few strawberries on top, then a generous dollop of the strawberry mousse.

What I'm trying to say is that there is no bad serving options here. Serve as you feel like, with fruits around and I'm sure it will look amazing no matter how you serve it.

Substitutions to the recipe

You can easily customize this recipe with what you already have in your house. Keep the cake as is and whip the aquafaba as recommended, but then, you can easily use other fruits to make it, like blueberries, cherries, raspberries, etc.

Also, trifles can be layered with many different components, so feel free to add some coconut whipped cream, custard, jam, chocolate pudding, etc.

Recipes to use the drained chickpeas

I hope you enjoy these mini vegan trifles as much as we do! If you try them, please leave a comment below and rate the recipe to let me know how they were. Your feedback is so helpful! 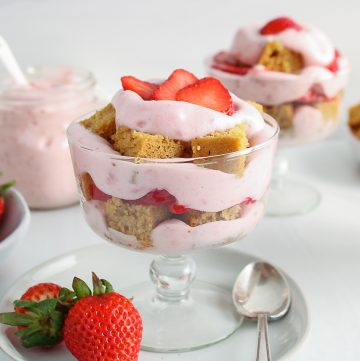 For the strawberry mousse