Make your own vegan pop tarts right at home with this easy recipe! They are much healthier than the store-bought pop tarts, plus they are so delicious and fun to make. Feel free to switch up flavoring and make them ahead to have easy and good-for-you breakfasts or after school snacks.

Pop tarts were such a childhood favorite. We all remember popping these little pies in the toaster for breakfast, don't we? Extra sweet fruit filling with a buttery crust that's covered with ultra sugary icing... this is dessert camouflaged as breakfast!

But as we all know, the store-bought pop tarts aren't that good for you. Ok for the occasional treats, but not the best start to your day. So why not make them yourself? I assure you they are easier to make than it seems!

And not only are they fun to prepare, these 100% made from scratch vegan pop tarts are SO yummy. The recipe is essentially a pie crust + jam + icing, nothing out of the ordinary, and you will have full control of the ingredient list. No processed sugar, no artificial flavoring, no preservatives. Just normal pantry ingredients.

They can also be made over the weekend and reheated throughout the week for quick breakfasts, just like the classic ones. They are also great for celebrations such as Mother's day brunch or Easter morning and their beautiful pink-ish shade makes them a fun treat for Valentine's day!

Why you will love this recipe

Making your own pop tarts is without any doubt much healthier than grabbing a box at the store. Not only are they made with ingredients you know and can pronounce, but also:

You can use your favorite pie crust to make them, but I recommend you follow this vegan coconut oil crust recipe. I used 50% all-purpose + 50% whole wheat flour and also made double batch, which gave me a total of 8 pop tarts.

Also, I added 2 tablespoons of coconut sugar to the pie dough straight to the food processor with the flour to add a subtle sweet flavor.

Just as recommend in the recipe, chill the dough in the fridge before rolling.

Once your dough is prepared and chilled, divide it in 2 equal balls. Then, roll each of them on a lightly floured surface using a rolling pin to a thin sheet of about ¼ inch thick. The dough might crack while you roll, this is normal and gives the BEST flaky dough. So, simply use your fingers to press on the dough to repair the cracks once in a while as you roll without overworking the dough.

When rolled, use a knife to divide each sheet into 8 equal rectangles that are about the shape of a pop tart. You should have 16 pieces out of your 2 rolled sheets: 8 for the bottom and 8 for the tops of the pop tarts.

Cover 2 baking sheets with parchment paper and transfer 4 rectangles on each of them. Add about 2 tablespoons of strawberry jam over each piece making sure to leave an edge all around without any jam. Then, top with another piece of dough (the largest should go on top).

Then, using a fork, press all around the pop tarts to seal the 2 layers of dough together. Take your time and ensure no spots are left un-sealed as the filling might try to leak out while cooking.

Bake the pop tarts for about 30 minutes or until golden brown with crispy edges. Depending on your oven, you might need to bake both baking sheets of pop tarts one after the other one for best results.

While the pop tarts are baking, make the frosting. Follow this cashew frosting recipe to make it. In this case, I also added some freeze-dried strawberries (with a little extra milk to help blending them in) so it adds color and flavor.

I recommend to make the frosting ahead of time. The recipe requires the cashews to soak and I found the results better when the glaze was first chilled in the fridge before covering the pop tarts.

Once the pop tarts are done baking, let them cool down and then spread the icing over. You can also sprinkle some extra freeze-dried strawberries over.

This is a great basic recipe to flavor your pop tarts the way you want. Simply use your favorite flavored jam or even try using chocolate, apple pie filling, cherry pie filling, marmalade, etc. Aim for a filling that's not too thin for easier sealing process of the pop tarts.

Also, if you want to avoid making the cashew frosting or want to keep these vegan pop tarts fully nut-free, then you could spread some plant-based milk and then sprinkle coconut sugar over them before baking. Or, swap the frosting for:

Keep in an air tight container in the fridge for up to 3 days. Ideally, keep the pop tarts and frosting apart while storing them so the crust does not get too soggy. That being said, I frosted them all to take pictures, so I had to store them with the frosting on and they actually kept pretty well that way too.

If you plan on having more than you can eat, another option would be to freeze some of them. In that case, prepare the pop tarts, but freeze them before baking them. When you want to eat them, thaw in the fridge overnight and bake in the morning as directed. You could also freeze them after baked if you must and thaw in the fridge before enjoying.

The crust is made with coconut oil, will this mean the pop tarts taste like coconut?

Can I reheat them in the toaster just like the store-bought ones?

No! They are going to be too puffy anyway and won't fit in a regular toaster. Plus, the frosting would leak/stick to the sides of a toaster. Use a toaster oven to reheat them or just your regular oven.

Can I make them gluten-free?

Yes, simply use a gluten-free flour to make the crust or use your favorite gluten-free pie crust recipe!

I hope you like these homemade pop tarts as much as we do! If you try them, please leave a comment below and rate the recipe to let me know how they were. Your feedback is so helpful! 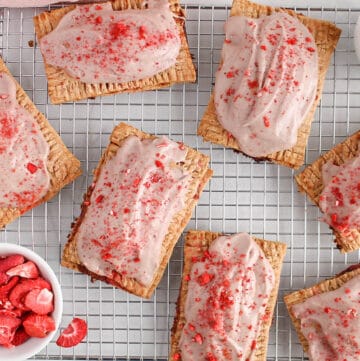 Make your own vegan pop tarts right at home with this easy recipe! They are much healthier than the store-bought pop tarts, plus they are so delicious and fun to make. Feel free to switch up flavoring and make them ahead to have easy and good-for-you breakfasts or after school snacks.
PRINT RECIPE PIN RECIPE
Prep Time30 mins
Cook Time30 mins
Total Time1 hr
Servings 8 pop tarts
Author Jessica Laroche