This vegan rhubarb crumble might be the best dessert recipe to make in the spring. You will enjoy its tangy rhubarb creamy base that's topped with a nutty oat crunchy topping. Easy to make, healthy and gluten-free.

Every year when spring begins, I feel such in a rush of rhubarb-recipe-making-projects. We have 2 large plants in our garden that come out super early, however, they just don't seem to stay plump and beautiful for very long. So, we have lots of rhubarb for such a short time.

Last year, I had lots of fun making this barley breakfast bowl for the blog that's served with a quick strawberry-rhubarb compote. And it was a big hit again this year. But although rhubarb is often combined with other fruits, I decided to make something else that's super simple and keeps the rhubarb as the center of the recipe.

Because as you know, rhubarb is so intense with tart flavor that it benefits from mixing up with other sweeter fruits. I actually remember growing up eating the rhubarb straight from the stalk, still raw. Crunchy-extra-sour-RAW-rhubarb. That's crazy, who does that?!?.

Ok, I have to admit that I would dip the stalk in white sugar with every bite, but still, the tart & sour flavor must have been brutally ruining my taste buds.

Childhood memory aside, this easy rhubarb crisp combines tart rhubarb with a hint of vanilla flavor and just enough sweetener to keep the tart level down, without masking the rhubarb unique delicious flavor. It also has that nice rustic look that makes the rhubarb really shine. Hope you enjoy this seasonal treat!

Again, this is a simple recipe that only requires 7 pantry ingredients, plus the rhubarb. It is also easily customizable depending of what you already have or looking for.

What's rhubarb and how to prepare it

Rhubarb is a vegetable (not a fruit!) that's in the same family as sorrel. It has such a funny look with its long celery-like fibrous shape. The stalks can be all the way bright red or greener with some reddish areas. The color won't affect the taste much, although deep red stalks can be a little sweeter.

Rhubarb grows usually from March to mid-June, although you might be able to find some all year long (can grow indoor). When picking the talks, either at the market or from your own plant, look for plump, as red as possible, large stalks with minimal bruises.

How to prepare rhubarb

First, make sure to remove the leaves from the stalk if they were not taken off already. They are toxic as they contains lots of oxalate, so cut it off and discard.

Then, look at the stalk and remove any bruises you can see. You can use a peeler to do this. Also, some larger rhubarb stalks can have an outer layer that's a little more rough and thick. If that's the case, then peel that layer off (even if it means removing the red layer, it won't affect flavor) so the fruit compote from the crumble is not too fibrous. Clean and dry the stalk before using.

Then cut the stalk in cubes. For this recipe, I found that cutting in smaller cubes (about ½ inch or less) rather than larger ones gave a creamier fruit base, which was more pleasant.

How to make a vegan rhubarb crisp

This rhubarb dessert is super easy to make! You will have to prepare the fruit base right in the baking dish, top with a oat mixture, then bake.

Start by mixing the cornstarch with water in a small bowl until there are no clumps anymore. Then, to the bottom of a 8 x 10 baking dish, add the maple syrup, vanilla extract, corn starch mixture and cubed rhubarb and stir to combine. Set aside.

In a medium bowl, add the melted coconut oil, oats, almond flour, walnuts, salt and maple syrup. Stir well to make sure the mixture is uniform.

Distribute the oat topping over the fruit and spread evenly using a spoon or your hands. You can press the mixture down a bit so it creates nice clusters of oats. Bake for 35-40 minutes or until the top is nicely golden brown and let it sit for 10-15 minutes before serving.

This rhubarb crumble can be eaten warm or cold. When the crumble is just getting out of the oven, then you can serve it warm, with vegan ice cream, if you want, that will slowly melts over the warm saucy fruit compote. It is also delicious served with coconut whipped cream.

Similar to a baked oatmeal, you can also prepare it ahead of time and serve it for breakfast. In this case, you can serve it with banana ice cream to keep it healthy or add a large dollop of coconut yogurt.

Keep the leftovers covered in the fridge for up to 4-5 days. The crumble topping is at its best crunchy texture the same day it was prepared and will lose on its crispiness after storing in the fridge (which is still very good!).

I hope you enjoy this vegan rhubarb crumble as much as we do! If you try it, please leave a comment below and rate the recipe to let me know how it was. Your feedback is so helpful! 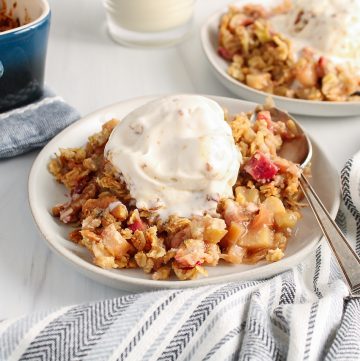 For the crumble topping

Prepare the fruit base