Learn how to make your own vegan horchata right at home! This simple recipe will give you a sweet rice milk that carries subtle cinnamon and vanilla flavor with a nice rich consistency. Also called "agua de horchata", this recipe is the perfect dairy-free drink to accompany any Mexican meal!

If you have never had horchata before, then you are in for a treat!

The first time I tasted this Mexican rice milk was a while back when we lived in Seattle. There was a small authentic Mexican restaurant where I would stop by sometimes after picking up our son from his nearby daycare. I remember noticing everyone drinking a white cold drink, so I just asked for one.

It was so good that I would go back mostly for the flavored milk. They had amazing tacos too, but really, that horchata was something.

Pretty impressive to have a glass of milk get so much of the attention.

But horchata is not just a regular milk, but more like a creamy agua fresca (meaning 'fresh water' in a rich texture). It is a sweet milk that has a subtle cinnamon flavor with a hint of vanilla. Such a delight when you need a drink to tame the heat from a spicy Mexican meal!

This horchata recipe I share is a dairy-free version of the classic recipe and is also quite easy to make. It takes me about 5 minutes to throw the ingredients in my blender, transfer the whole thing in the fridge overnight (yes, yes, the blender in the fridge!) and then blend + strain in the morning. So, other than the soaking time, it requires minimal hands-on prep time to make a super fun authentic Mexican drink right at home!

As a side note, check out this mango aqua fresca for a fruity Mexican cold drink!

Horchata, also called agua de horchata, is a "milky drink" that originates from Spain (made with tiger nuts), but also is very common in Mexico where it is made mostly with white rice. You can find Horchata in other countries as well where the recipe can vary a lot and might be made using sesame seeds, barley, melon seeds and much more.

A Mexican style horchata will be made using rice, but also cinnamon and vanilla. Horchata is also often sweetened with sugar and can sometimes include regular milk or even condensed milk.

Here in the USA, you will find horchata available at most authentic Mexican restaurants. Horchata is served chilled and typically adds a refreshing touch to a heavy and sometimes spicy meal. It is something you have got to try next time you visit a typical taqueria, or even better, simply make it yourself at your next in-house taco bar!

More often, it is not made vegan. Most horchata drinks will be made out of rice to follow the traditional recipe, but now, they will also often include some cow's milk or condensed dairy milk to make it creamier. Thus, they are usually not dairy-free.

Most horchata will use white rice, white sugar and some will even add condensed milk to make the drink extra sweet. I really don't feel like you need to sweeten this drink that much, so I simply add maple syrup to make it slightly sweet.

I also experimented with brown rice and it really worked out well! The milk will still have that very bright white look and it won't taste any different than a white rice horchata. You can also make it using white rice if that's all you have, of course.

How does a vegan horchata taste?

Have you had rice milk before? It really tastes close to a rice pudding! It has a starchy feeling to it that's super pleasant. I also make my horchata using raw almonds to make it creamier, but the nuts also bring extra sweetness and a delicious nutty flavor. Typical Mexican horchata will include cinnamon and vanilla that complement each other to boost the flavor from the rice.

Horchata is one of those extra simple recipes that only includes a few straight forward ingredients, but you will notice their flavors intensify when they are combined together.

A vegan horchata is very similar to a regular horchata. Some recipes will also include regular cow's milk on top of the rice milk to make the consistency thicker, but in this case, the addition of raw almonds makes the milk super creamy so you can skip on any additional milk.

How to make this vegan horchata

This is SO easy to make! BUT, you will need to be a little patient as you will have to let the rice soak for a few hours and the straining process might take a few minutes to fully complete.

Step 1: Soak (ideally the day before)

What kind of cinnamon to use to make a Mexican horchata

Cinnamon sticks are better then ground cinnamon as it gives such an amazing cinnamon-y natural flavor to the milk by infusing it better. Choose either Cassia or Ceylon sticks. The Ceylon kind of stick breaks easier, but it won't be a problem as you will filter the milk before serving anyway. I used the cinnamon sticks from Frontier Coop.

If you don't have any sticks, then simply use a ground cinnamon. Start with about 1 teaspoon and add more as you taste. You are looking for a subtle cinnamon flavor opposed to an overpowering cinnamon-y taste.

Tips when making a vegan horchata

This sweet Mexican rice milk is at its best when served really cold. So, make sure to chill it before serving and pour over a glass that was first filled with ice cubes so it is nicely refreshing.

Homemade horchata is amazing when paired with Mexican food! Try serving it with enchiladas, lentil taco, spicy salsa, tostadas, fish tacos, or alongside this chipotle black bean bowl. We also love it when making nachos. Don't forget to make some on Cinco de Mayo too!

We had more horchata then you can imagine while testing it, so I became more creative and used it in cereals, smoothies, overnight oats and cooked oatmeal using it. I even made a cold matcha chai latte with this delicious horchata (omg, it was so good!).

It does make for an amazing refreshing summer drink, but also great during the holidays, such as Christmas for a fun non-alcoholic drink that everyone can enjoy, kids and pregnant women.

To make your glass look beautiful, sprinkle some ground cinnamon over or why not add a whole stick of cinnamon to help with stirring?

Keep the milk in a glass container (less reactive than plastic) in the fridge for up to 5-7 days.

Depending on how well the milk was strained, some precipitate might accumulate at the bottom, so be sure to shake/stir very well before serving.

If you end up not drinking it all by the end of the week (unlikely though :)), then freeze in an ice cube tray and add to your smoothies straight from the freezer.

Can I make a horchata without a blender?

Yes you can? In that case, you can simply flavor store-bought rice milk with a little sweetener, vanilla extract and some cinnamon to taste.

How to make a creamier horchata?

Make sure to soak the rice overnight (opposed to only a few hours) to ensure easier blending of the rice and turn your milk thicker. Also, you could add some coconut milk to it, which is usually super creamy and rich (especially if you don't mind a little coconut flavor).

Do I need to use a high-speed blender to make it?

Ideally, yes. The rice remains rough and sturdy, even after soaking all night, which will be crushed better if using a high speed-blender. If you have a regular blender, then try blending it longer.

I hope you enjoy this vegan horchata as much as we do! If you try it, please leave a comment below and rate the recipe to let me know how it was. Your feedback is so helpful! 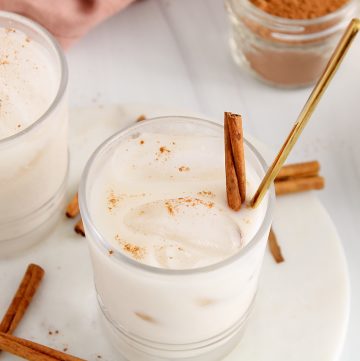