Warming cinnamon spice is combined with sweet maple flavor in these cinnamon oatmeal cookies. This is a quick recipe and I'm sure you already have everything you need to make them. So grab a bowl because you are just 30 minutes away from enjoying a healthy and tasty treat!

A little over 2 year ago, I still remember very clearly my husband obsessively hoping for our baby girl Lilianne to be born on the exact Equinox day (September 22).

I also remember being highly annoyed by it, since this seemed to me totally unimportant. Especially since I was 38 weeks pregnant, already super busy with an active toddler and ready to burst.

Even though she came 2 days earlier than that very special day, I have to admit that I am now pretty excited to have an autumn child. Her birthday is associated with one of the most exciting times of the year!

Not only do we finally get to harvest all my favorite foods, but I also cannot get enough of all the spices and cozy concoctions, either savory or sweet. Just like in these Pumpkin overnight oats, Vegan tofu Tikka Masala or Spiced coconut whipped cream, the mix of warming spices are just what I need right now to get my autumn fix.

And to add more fall recipes into my repertoire, I made these vegan cinnamon cookies. They make for the perfect snacking cookie to enjoy with a warm cup of tea on a fall evening.

And guys. They are sooooooo good.

Even my I'm-sorry-I-only-eat-chocolate-chip-cookies husband could not stop eating them. They are that good.

Cassia or Ceylon cinnamon, which one to choose?

Not all cinnamon are the same. Shocking, right? For so long I thought cinnamon was, well, just cinnamon. But it is not that simple.

There are 2 different categories of cinnamon: Cassia vs Ceylon

Both types of cinnamon come from harvesting the inner layers of barks of different trees, but from the same family. Each type will differ in color, taste, texture and smell.

Their coumarin level also vary depending of which type of cinnamon it is. Coumarin is a natural chemical found in all cinnamon and is known to potentially be toxic to the liver if consumed in large amount.

Cassia cinnamon (includes Korintje, Saigon, Chinese and Vietnamese varieties) has a high level of coumarin. This cinnamon is the most common one and the one you are likely to find in most households in USA and Canada. You can find it in any grocery stores and it is the one used in industrial baking. A tough single layer made from a rougher part of the bark makes the cinnamon roll stick. When ground, its color is dark brown, almost reddish, and its flavor is more pronounced and spicier.

Ceylon cinnamon (also called true cinnamon) has a low level of coumarin. Although easy to find here in America, this type of cinnamon is more commonly used in Mexico and Europe. The stick made from this cinnamon is more delicate and can break easily. Its color is more pale and its taste is slightly sweeter and milder than the Cassia. It is also known to deliver more complex flavors when cooked or baked.

For this recipe, Ceylon cinnamon was used. See the notes in the recipe description if you want to use Cassia cinnamon. Having trouble knowing what type of cinnamon you have in your house? If your bottle does not mention Ceylon cinnamon, either in the name or the ingredients on the other side of the bottle, then consider it being Cassia cinnamon.

Why are these spiced cinnamon oatmeal cookie a healthy snack?

Try adding these ingredients to personalize your cinnamon oatmeal cookies

I hope you will love these autumn oatmeal cookies as much as we do! If you try them, please leave a comment below and rate the recipe to let me know how they were. 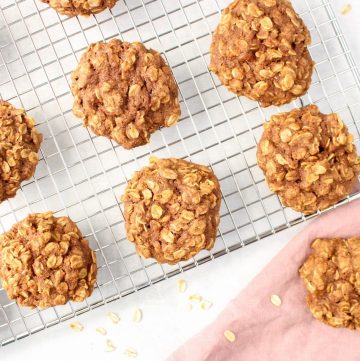 5 from 4 votes
This one bowl only and easy to make cookie recipe is perfect for when craving something sweet but without having to indulge. The cinnamon flavors are deliciously combined with maple syrup and you will love the chewy bite from the raw oats.
PRINT RECIPE PIN RECIPE
Prep Time15 mins
Cook Time13 mins
Total Time28 mins
Servings 12 cookies
Author Jessica Laroche