These vegan twice baked potatoes are creamy, savory and so delicious! Makes for an amazing vegetable side dish recipe, but also can be served as a full meal! 100% plant-based, dairy-free, gluten-free and vegan.

It is the holiday season and I thought I would share an amazing festive side dish to add to your Thanksgiving of Christmas menu. They can obviously be enjoyed all year long, but these vegan twice baked potatoes feel more special and definitely earn their spot at the holiday table.

They are so delicious! And you can make them as festive as you wish. I kept them on the healthy side using a whole food plant based tofu sour cream to turn their filling super creamy, but you can obviously add some vegan butter and even vegan cheese for more of a treat if you want.

And they are pretty easy to make, although they take some time. You will have to bake whole potatoes until tender, then scoop out their insides to mash it with sour cream until creamy and flavorful. We loved adding tempeh bacon or bacon bits and green onions for added texture and flavor. Scoop the mixture back in the potatoes and bake again! They were a huge hit!

They are meant to be a vegetable side dish, but we actually enjoy them as a full complete meal. The tofu sour cream load them with tons of plant-based protein and adding extra store-bought marinated tempeh also makes them super filling and satisfying. The tempeh is optional, but adds a nice bacon-ish smoky flavor that's so amazing.

Best potatoes for this recipe

I think Russet potatoes are the number one choice for twice baked potatoes: they come in a larger size, have a nice creamy texture when mashed and also, a sturdy and tougher skin that holds better when stuffing them. Red potatoes would create a tasty filling, but their skin is super thin and delicate, which would make it harder to stuff and bake them for a second time without falling apart.

Also, when choosing your potatoes, aim for evenly shaped potatoes so they stand better straight up after sliced in half.

Prepare the potatoes and bake #1

Pre-heat the oven to 400º and line a baking sheet with parchment paper.

Place the potato on the prepared baking sheet and rub them with a little olive oil using your hands to get it all over their skin. This step is optional if looking for an oil-free whole food plant-based recipe. Then, you can also sprinkle some coarse salt over.

Using a fork, poke the potatoes a few time through their skin and then bake for about 60 minutes or until fork tender.

While the potatoes are baking, it is a good time to prepare the tempeh bacon, if using. Simply chop the slices into small cubes and roast in a pan on medium-high heat until crispy, about 7-10 minutes. Once done, set aside until ready to use. You can also follow this bacon bits recipe instead of using tempeh.

Once the potatoes are done, take them out and let them cool down for a few minutes. Then, slice them in half lengthwise.

Use a spoon and scoop out the flesh by leaving a thin wall of potatoes all around to help the "skin boat" to hold well and be more solid once stuffed (about ⅛ inch thick).

Transfer the potato flesh in a large bowl as you scoop it out and add the sour cream, nutritional yeast, green onion, tempeh bacon or bacon bits, salt and pepper to it. Use a hand held potato masher or a hand held electric whisk to mash until smooth to your liking. I like mine a little chunky, but you do you.

If the mixture still feels too dry (it will depend how much potato you had to mash), then you can add more sour cream or some plain plant-based milk. Just make sure to keep some extra sour cream for serving later as well. If you want to use vegan butter, now is a good time to add it.

Once the mashed potato mixture is done, scoop it back in the potato skins using a spoon.

Sprinkle some salt and pepper over and bake for 10-15 minutes.

If you wanted to include vegan cheese, then you could add some over the potatoes before baking them for a second time.

The twice baked potatoes are already very flavorful, but it is fun and appetizing to garnish them when serving.

Make sure to keep some extra sour cream to dollop over the baked potatoes to serve. It adds a cold and tangy final touch that's just so delicious. Feel free to make a double batch of the sour cream so you have plenty!

Also, top with more fresh green onions when serving, but chives or even finely diced red onion would work to add that nice pungent flavor and crunch.

I also like to keep some more crispy bacon bits or tempeh bacon aside for garnishing to add a pop of color as well.

You could also really load it up with black beans, lentils or chickpeas to make this meal super filling. Or even a vegan chili for a saucy result. Yum!

It is easy to make twice baked potatoes your own recipe! You can add so much more to the mashed potato mixture, especially if making this recipe as a full meal. Here are some ideas:

Keep leftovers in an air-tight container for up to 5 days. Keep any topping ingredients apart while storing.

If making them ahead or if you wanted to freeze them, then I recommend you store them just before the step of baking them for the second time.

Thaw in the fridge overnight and then, once ready to eat, simply put them in the oven to bake them for a second time. You might have to bake them a little longer if they were super cold when you added them to the oven.

Simply bake them in the oven at 350-400º for about 15 minutes or until heated through. A mini toaster oven would be amazing for that!

I would also totally reheat them in a pinch using the microwave too.

Pairing suggestions for this recipe

I hope you like these vegan twice baked potatoes as much as we do! If you try them, please leave a comment below and rate the recipe to let me know how they were. Your feedback is so helpful! 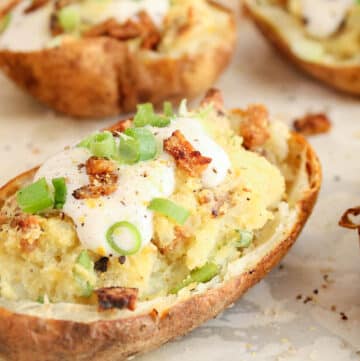