These crispy vegan hash browns are done using only 3 simple ingredients and make for a tasty side dish for breakfast or even dinner. They are perfectly crispy on the outside and soft and creamy on the inside. Made without eggs and fully dairy-free and plant-based.

A pile of homemade vegan hash browns for breakfast? It does not get much better than that! Pair them with a savory tofu scramble for the most amazing vegan brunch meal.

You do need some time to shred, rinse and fry the potatoes, so keep this recipe in mind for slow lazy mornings. But once you try them, I bet you will want to make them every weekend.

I have learned that doubling this recipe is always better so we don't have to fight over them. They are SO delicious!

We absolutely love their crispy crust hiding a tender savory potato center. And look at that stringy middle texture, super fun and satisfying.

I have made multiple attempts to this recipe as I was looking for a grab-able kind of patty. The one you can just grab and go, Mc Donald's style, as opposed to a pile of cooked shredded potatoes on your plate. Just so you can dip the patty in a sauce. We are all about dip-able finger foods in this house.

Well, I am more than happy with the result! My potato-obsessed husband says so too, after hiding them away from the kids (literally).

They are an American version of potato latkes and pretty much look like potato fritters. We love them with ketchup or any sauce really, they are such a tasty treat!

This recipe really is all about the way you handle the potatoes. They only require 3 common ingredients that I am sure you already have on hand, but to reach a crispy hash brown patty, the potatoes will need to be shredded, then quickly soaked and rinsed, then patted dry before shaping them. This allows to remove some of their starches, which helps them crisp nicely. It is an easy and quick step, but don't skip it!

I wondered this before writing the post, pondering if it is necessary or redundant to add "vegan" before "hash browns".

Although most of the time hash browns are fully plant-based, I found many popular recipes that were actually including eggs to help bind the shredded potatoes. Probably to also add more flavor and a fluffier middle texture too.

Mc Donald's hash browns also aren't vegan (not that this is surprising at all). They do not contain eggs, but includes some milk products as part of a beef flavoring ingredient.

Want to ensure your hash browns are vegan? Then, learn how to make your own!

What's to love about them

Start by peeling the potatoes and shredding them. Use a box grater on the small holes side so you can finely shred them. This is important for best texture.

Then, transfer the shredded potatoes to a large bowl and generously cover with cold water. Stir the potatoes around and let them sit for 10-15 minutes.

Then, drain in a fine mesh colander and rinse them. Keep rinsing until the water that comes out is clear.

Transfer the drained potatoes over a clean towel, lift the corners, twist the bottom to lock the potatoes in and press to remove as much water as you can.

Transfer the cleaned and dry potatoes in a medium size bowl. Add the flour, chives, salt and stir well. Use your fingers to help combine the mixture as the potatoes tend to clump together.

Warm up a large non-stick pan over medium heat. I like to spray a little oil over, but that's optional. Know that if you make them completely oil-free, they might not brown much and won't turn as crispy, which is fine!

While your pan is warming up, divid the potato mixture into 5 equal balls. Then, I like to use a cookie cutter to shape them in circles of about ¼-1/2 inch thick. Don't make them too thick or the middle might not cook properly and don't over press them either.

Let them cook for about 5 minutes before flipping them (have a sneak peek under to see when they turned golden brown). Then cook for 5 more minutes.

Serve right away with the dipping sauce of your choice.

Hash browns are typically not overly flavored, so I kept my recipe pretty conservative with adding only some chives and salt. BUT, you can really go to town and flavor them just the way you want.

Try adding some garlic (fresh or powder), onion powder, paprika, smoked paprika, dried herbs such a basil or parsley. Or even, make them a little spicy with cayenne or red pepper flakes. Also, just like I did in my zucchini fritters recipe, feel free to add tons of fresh herbs like cilantro, basil, dill or even mint to really boost the flavor.

I haven't tried combining them with other veggies, but I suspect that a little shredded carrots or zucchini (squeeze water out first) would also add color and flavor.

Serve these hash browns with a side of ketchup and they will be gone within minutes.

Include these hash browns part of your next brunch. They go well with tofu scramble, spinach quiche, breakfast sandwiches, etc.

Hash browns are not only perfect for breakfast. They also serve well as a side dish to a hearty meal such as a tempeh stew, lentil meatloaf, or with a mushroom saucy stroganoff. Also goes well with burgers and veggies.

Leftover hash browns store pretty well, although won't stay very crispy after chilled. To reheat, warm them up for a few minutes on each sides in a pan (which could revive some of their crispiness) or use the microwave, although they will definitely be different in texture.

I haven't tried freezing them, but I'm thinking it might work. Thaw in the fridge overnight and reheat in a pan.

Can I make them gluten-free

Can I bake them in the oven?

You can, but I find the result better when pan-fried as they get crispier. It also is quicker to pan-fry them opposed to oven-baked. But if you wanted to try making them in the oven, then I would bake at 375º for 20-30 minutes or until golden brown, flipping them halfway through. Watch them carefully, you will have to subjectively adjust cooking time!

I hope you like these vegan hash browns as much as we do! If you try them, please leave a comment below and rate the recipe to let me know how they were. Your feedback is so helpful! 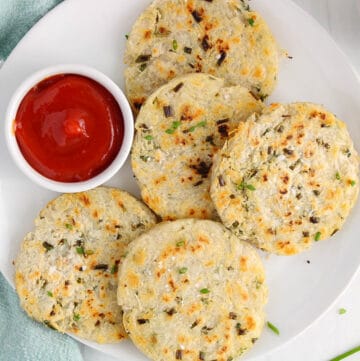 These crispy vegan hash browns are done using only 3 simple ingredients and make for a tasty side dish for breakfast or even dinner. They are perfectly crispy on the outside and soft and creamy on the inside. Made without eggs and fully dairy-free and plant-based.
PRINT RECIPE PIN RECIPE
Prep Time20 mins
Cook Time10 mins
Total Time30 mins
Servings 5 Hash browns
Author Jessica Laroche