Bring a fun childhood staple back in the house with this easy one-pot vegan hamburger helper! This version is much healthier, but as tasty and quick to prepare as the boxed one. It makes for a great last minute weeknight dinner that's wholesome and super satisfying!

Boxed hamburger helper was probably one of my favorite meals growing up.

I mean, it's like a combo of mac and cheese with ground beef that's spiced up and all made in one-pot. No wonder everyone loved it.

This version is completely vegan and features seitan as the meat replacement. Seitan adds such an amazing chewiness to the meal and brings extra flavor too. If you don't want to use seitan, then simply swap for other meat-less ingredients such as lentils, tofu, tempeh, etc.

And here is the best part: it's a one-pot recipe! Everything goes in the same pan (or pot), including the raw noodles. The pasta cooks in the savory creamy mixture while releasing some of their starch to help thicken the sauce. Just like the old fashioned boxed pasta!

Why you'll love this recipe

This meal really feels like a vegan cheeseburger, but served with pasta! The ground beef is replaced with seitan for a very similar chewy bite and the sauce is made using soy milk + nutritional yeast to get a cheesy touch.

If you have never had seitan before, then this recipe is a great place to start!

Seitan is made using wheat gluten, which comes from regular flour that had its starch taken away to leave the high gluten protein. It has a bouncy, chewy and very meaty texture that's so amazing (even more meaty than tofu or tempeh). I also love seitan for its high-in-protein content. Careful though, seitan is not for someone with gluten sensitivity or suffering from celiac disease!

Where to buy seitan and which kind to get

You can now find seitan in most grocery stores in the fridge section with the tofu, usually close to the produce.

Although seitan's flavor is naturally mostly bland, it is often sold in flavorful packages. You will find seitan that's ground, in sausage shapes, sandwich slices and in many other forms.

For this recipe, I used the Upton's ground seitan, Italian flavor. If you have a different brand available at your grocery store, simply use the one you can find and grind it using your hand or chop using a knife.

What kind of noodles to use

The traditional boxed hamburger helper is made using egg noodles which I swapped for regular wheat noodles to avoid the eggs.

Short noodles are best when making this dish. Choose anything on the small side, like macaroni, ditalini, cavatappi, rotini, etc. I haven't tried it, but I think that long noodles would not work very well and probably would break a lot while cooking.

Also, I like using a whole wheat kind of noodles when making this dish. White noodles were also tried and worked well too with the same ratio of noodles vs liquid. Simply use whatever you have!

I find that seitan adds such an amazing chewiness to the meal, but if you don't want to use it, then there are many other options to replace it:

In all cases, you might need to adjust the spices if using a seitan substitution. The seitan I used was filled with spices, so if using a flavorless substitution, then you might need to add extra dried herbs or spices or even, consider adding a splash of soy sauce for extra umami flavor. Also, if using other kinds of vegan ground meat, then you can add it alongside the veggies so it can brown before adding the broth.

How to make this vegan hamburger helper kid friendly

The seitan that I used was very flavorful and heavy with pepper flavor. My hubsand and I simply could not stop eating it, but even though my kids are quite adventurous with food, these strong flavor were a little much for them.

If you are making this meal for a family with kids, then choose carefully your seitan and consider using a meat replacement if you want to be sure to control the spice level (or make your own seitan!).

Also, you can make it more cheesy by adding extra nutritional yeast or vegan cheese to the pan. Also serve with vegan parmesan cheese.

I found this meal better served when just prepared as the noodles keep sipping on the sauce while storing, which soften the noodles a little more. It still made for a great next day lunch though!

Store any leftovers in a air-tight container in the fridge for up to 3-4 days. When reheating, add a splash of broth, water or vegan milk to loosen up the sauce!

I hope you enjoy this vegan hamburger helper as much as we do! If you try it, please leave a comment below and rate the recipe to let me know how it was. Your feedback is so helpful! 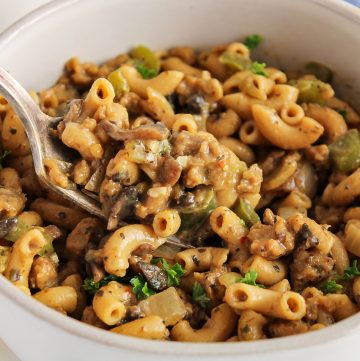 Bring a fun childhood staple back in the house with this easy one-pot vegan hamburger helper! This version is much healthier, but as tasty and quick to prepare as the boxed one. It makes for a great last minute weeknight dinner that's wholesome and super satisfying!
PRINT RECIPE PIN RECIPE
Prep Time15 mins
Cook Time15 mins
Total Time30 mins
Servings 3
Author Jessica Laroche