This easy vegan goulash is quick & simple and features noodles cooking in an amazing tomato broth flavored with paprika. Plus, it is loaded with healthy vegetables and has a nice meaty texture. Makes for a delicious weeknight dinner that's healthy and great to feed kids, meat-eaters, omnivores, etc. Perfect for the whole family!

If you love this vegan hamburger helper, then you need to try my new American-style meatless Goulash! It is a saucy dish with a nice 'meaty feeling' from the lentils, but also veggie-packed, super flavorful and more importantly, super quick and easy to prepare.

And don't be afraid of the name! There are no weird ingredients, only wholesome and simple things I'm sure you already have on hand!

This recipe is perfect for the colder months when comfort food is all you want. Once you cook the lentils, then everything else comes together in one-pot, even the raw noodles. It makes for a large pot of stew-like cozy tomato-y macaroni that you just won't be able to stop eating. Nom nom.

What's to love about this dish

Goulash originates from Hungary where it has been served since the 9th. century. It is actually a symbol of Hungary and there are multiple variations of the Hungarian goulash depending on the ingredients used.

The Hungarian goulash looks much more like a stew, almost a soup, packed with pieces of meat that are bathing in a tomato broth. There are often also large cubes of potatoes alongside other vegetables and paprika is the main spice flavoring the dish.

Over the years, an American version of a goulash was born, although it does look very different than the Hungarian one. Also called 'American Chop Suey', the goulash is made using elbow macaroni noodles and is much more of a pasta dish than a saucy stew, although also featuring meat in a tomato-paprika base.

Making a vegan version of a goulash

Even though meat is a key ingredient in a goulash, it is also a recipe that easily can be made vegetarian.

In this case, the meat is replaced with tender lentils that recreate a crumbly hearty feeling. It makes the dish super satisfying and higher-in-protein too.

Cheese sometimes is included part of an American goulash, but you really don't need it. If you were looking for a cheesy dish, then feel free to add a sprinkle of vegan cheese after the noodles are cooked.

I like to use about ¾ cup of dried lentils, which gives me about 1 ½ cup of cooked lentils (perfect amount for this recipe). I usually transfer the dried lentils in a small pot, cover with plenty of water, simmer for about 20 minutes or until they are tender (but not mushy) then drain to remove the extra water. Feel free to use canned cooked lentils!

In a large pot, start by sautéing the onion with the celery and carrots for 5-7 minutes. Then, add the dried herbs, paprika and garlic and cook for another minute while stirring often.

Add the broth, tomato sauce and diced tomatoes and stir. Cover and let it simmer for about 15 minutes on low-medium heat stirring a few times.

Then, add the noodles and cook until tender, about 10 minutes (keep al dente). Once the noodles are cooked, turn off the heat and add the cooked lentils. Stir well and adjust seasoning. Serve the vegan goulash immediately.

What kind of paprika to use

Did you know that paprika comes from pulverizing dried red peppers to a fine powder? Paprika is the national spice in Hungary and has a rich flavor with a beautiful bright red color. Different kind of red peppers (bell pepper, chili pepper, red peppers, etc) and varied methods of drying are used to prepare paprika, explaining the wide variety of flavor you can find. The most common are:

To make this recipe, use the kind of paprika you prefer! I actually love to combine about half sweet + half smoked paprika, but I'll skip on the spicy paprika so my kids can eat the meal.

This dish is amazingly versatile: you can swap the veggies and use mushrooms, corn or add some leafy greens. Also try adding a splash of Worcestershire sauce or even liquid smoke if you want a stronger smoky kick.

If you want the goulash to be saucier, then simply add more tomato sauce and don't hesitate to use fire roasted tomatoes for a charred vegetable touch.

Also, you can easily swap the lentils for a different protein such as tempeh, tofu, TVP or seitan. (psst...although not whole food plant based, if you are trying to impress meat-eaters, then consider beyond meat). In these cases, brown the beef substitution in the pot with the veggies before adding the broth for best flavor.

One more thing: some goulash recipes will have cheese included. If you are looking for a cheesy touch, then add some nutritional yeast at the same time you add the paprika. You could also include shredded vegan cheese or even some vegan cashew ricotta, simply add them AFTER the dish is cooked.

Keep leftovers in an air-tight container in the fridge for up to 4 days. The noodles will soften and the sauce will slightly thicken, but still makes for great leftovers.

You can use the microwave or the stove top to reheat the leftovers. You might have to add a splash of broth or water to loosen up the noodles and also, don't 'over warm' as you don't want to cook it any longer.

What kind of noodles to use

Elbow macaroni noodles are a classic for an American goulash. But really, you can use any other type of noodles such as penne, orzo, farfalle, ziti, etc. I find it easier to use short noodles for this recipe. You can also use whole wheat noodles, although you might have to cook them a little longer and add more broth if needed.

Can I make this recipe gluten-free?

Can I make it ahead?

You can, but I found that the meal was as its best when just prepared as the noodles will keep cooking to a softer texture and the meal will be less saucy.

I hope you enjoy this vegan goulash recipe as much as we do! If you try it, please leave a comment below and rate the recipe to let me know how it was. Your feedback is so helpful! 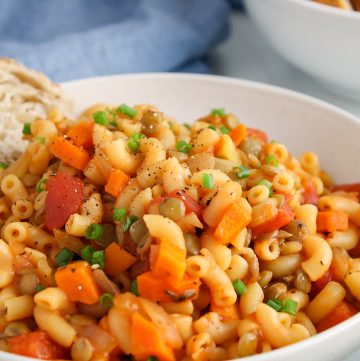