These vegan candied pecans are SO delicious, you won't be able to stop snacking on them! They are extra crispy, made entirely without any eggs or refined white sugar and lightly flavored with cinnamon, vanilla and maple syrup. Sweet glazed pecans are such a perfect snack to serve during the holiday or you can use them to garnish salads or to pack as holiday gifts!

Hands down, this is by far the best sweet and salty snacking I have had in a while!

I am not a huge snacker, but you have to take these little guys away from me or they will all quickly disappear. I highly recommend you to try this recipe, but be aware of their highly addictive nature.

They are crunchy, not too sticky, sweet & savory all at once and covered with a nice maple glaze followed by a background of vanilla and cinnamon flavors. You can't really tell there is added flavoring, but it just balances everything so perfectly.

And what's even more amazing is how easy they are to prepare! This 4-ingredient recipe comes together in under 10-15 minutes and then, simply let them cool down so they can crisp up. And no need to turn on the oven, everything is done on the stove. They make for such a perfect holiday snacking food!

Classic candied pecans will often include eggs, isn't it odd? Egg whites are whisked and then, once incorporated with the pecans and cooked, will create a binding effect that holds the sugar and makes the pecans fluffy and crispy.

In this case, we are simply going to skip on the eggs and instead of using granulated sugar, I found that maple syrup was amazing to replace that binding effect. The thick syrup coats the nuts so well and gets the pecans super crispy after cooling down. Plus, maple syrup has such an amazing flavor that naturally works well with pecans.

There are different ways you could flavor them, especially if it does not require to add on too many extra ingredients that will change the overall texture. I have tried making them without the vanilla extract, but with the zest of an orange instead and it was absolutely delicious. That would be a fun way to serve them during the holiday season.

If serving them as finger food for a game night or alongside beer, then make them spicy! In this case, omit the vanilla and the cinnamon and add the zest of one orange + 1 tablespoon of sriracha (or a dash or 2 of cayenne) instead. It won't make them super spicy, but adds a little kick that's super fun.

In a medium bowl, combine the maple syrup with the vanilla, cinnamon and salt. Whisk and set aside. If you opt for the spicy version, then skip on vanilla and cinnamon and add the orange zest and/or sriracha instead.

Warm up a large non-stick pan over medium-high heat. Then, add the pecans (with nothing else!) and roast them for a few minutes or until they get slightly toasted with some coloration and there is a delicious aroma invading the house, about 5-10 minutes. You need to stay around and stir/shake the pan often as they can burn quite easily.

When they colored nicely, then turn down the heat to medium-low if you toasted at higher heat (remove the pan from the stove for a few minutes if you feel like they are enough toasted or they are close to burn).

Once the pan isn't as hot, then pour the maple mixture over and fold the pecans so they all get nicely coated. If your pan is still super hot from roasting the pecans, then the syrup will bubble up vigorously and can potentially splash and quickly burn. So be sure to have a medium heat before pouring the syrup over.

Then, use a spatula to move the pecans around while the syrup thickens up, and this is going to go FAST! You want to have a gentle simmer with some bubbling for the crystallization to happen, but not too high so the syrup does not burn. Constantly stir and remove the pan once there is barely any syrup left (maybe about 2-5 minutes, depending on how high your heat is).

Lay a parchment paper over a surface and transfer the pecans over. Then, use your spatula to space them out as much as you can. The pecans that touch each other will clump while cooling down, which if fine, but you just don't want to end up with a huge pile of stuck together pecans.

Let the pecans completely cool down: this is essential for them to become crispier.

How to use them

We honestly simply snack on them just like that. But, they make for a delicious garnish for salads, ice cream, oatmeals and even to decorate cakes or pies.

If you are planning on making a holiday vegan platter, then be sure to include these candied pecans! I found this stunning fruit and vegan charcuterie board from "No Sweat Vegan" where they would be a great addition I believe.

One more holiday idea: serve them around this vegan cheese ball at your next holiday party!

Can I make them using the oven?

I love to make these pecans on the stove as I feel like I have a better visual of what's going on and can simply control easier the heat and the caramelization process to get what I want.

But if you want to try them using your oven, then combine all the ingredients together in a bowl (with the pecans), transfer over a parchment paper covered baking sheet and space them out. Then, bake in the oven for 10-15 minutes in a pre-heated oven at 375º. You will have to watch closely, taking them out a few time to toss them around and watch so they don't burn.

Keep them at room temperature for up to a week. I keep them simply in an air-tight jar in a cool and dark area.

They do tend to stick together a little more after being packed in a container, I suspect the maple syrup slightly liquefies over time, but they kept their nice crunchy texture pretty well and they were easy to break apart too. It is essential to keep them in a closed container to retain most of their texture.

I hope you like these vegan candied pecans as much as we do! If you try them, please leave a comment below and rate the recipe to let me know how they were. 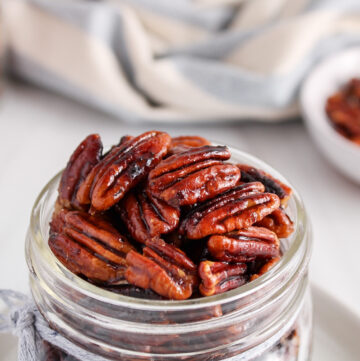 These vegan candied pecans are SO delicious, you won't be able to stop snacking on them! They are extra crispy, made entirely without any eggs or refined white sugar and lightly flavored with cinnamon, vanilla and maple syrup. Sweet glazed pecans are such a perfect snack to serve during the holiday or you can use them to garnish salads or to pack as holiday gifts!
PRINT RECIPE PIN RECIPE
Prep Time5 mins
Cook Time15 mins
Total Time20 mins
Servings 2 cups
Author Jessica Laroche