This creamy buckwheat mushroom risotto makes for such a fun twist on the classic risotto recipe! Loaded with nutrients, easy and so full of earthy flavors, this meal is great on nights where you are craving a filling and satisfying plate. Dairy-free and gluten-free.

I have been wanting to share a risotto recipe for a while now! The creamy yumminess, background flavor of cooked white wine, cheesy & salty little something: there is so much to enjoy from a cozy bowl of homemade risotto.

So I finally made it, but twisted the classic recipe to make it healthier and fuller in fiber and protein. Usually, arborio rice is the grain used to make risotto, but I used whole buckwheat seeds instead and it is so yummy. This might shock you, but try it and I can assure you that you will love it. We love the heartiness from buckwheat that also gives such a delicious nutty flavor to the whole creamy meal.

Let's not pretend that I invented buckwheat risotto though, the concept has been around for while. I made a buckwheat risotto the first time using beets (recipe from Deliciously Ella's cookbook) and was hooked right away. Who does not love a bowl of pink creamy food? Anyway, since then, I often make risotto using buckwheat instead of rice and we LOVE it. And this buckwheat mushroom risotto is definitely a favorite.

Plus, you know how much I love buckwheat! I shared a few buckwheat flour recipes, such as this buckwheat chia bread or this banana buckwheat pancakes, but it is actually very nice to use the whole seed itself instead of flour.

Compared to using a regular arborio white rice, in this case, expect a risotto that's chewier, with more flavors and that will fill you up so much better. Paired with chewy roasted mushrooms, sweet leeks and tender spinach, this dish makes for such a treat!

Hope you give it a try ❤️

What is buckwheat and health benefits

Although buckwheat looks, cooks and is served like a grain, it is actually a seed. Just like quinoa, it can also be called a pseudo cereal and unlike wheat, it does not grow on grass, but is related to rhubarb and sorrel instead.

On top of that, even though its name contain the word "wheat", it has nothing to do with wheat and is completely gluten-free!

Buckwheat became more popular in recent years, but has been harvested and eaten for centuries in Asia and Eastern Europe. It is loaded with nutrients and even is called a superfood by some. To give a few examples, it is known to carries lots of complex carbohydrates, but also protein and is rich in minerals. It is also packed with antioxidants!

Why we LOVE this recipe

In a large pan, roast the sliced mushrooms on medium-high heat until they lose most of their water and become nicely golden brown. Try not to move them around too much in the pan so they can roast (as opposed to steaming them) and keep your heat high enough to help them brown. Add some salt to taste.

When done, remove from the heat and set aside.

Transfer the vegetable broth to a medium pot and warm up on medium heat. If it starts to boil or simmer, then turn down the heat. You want to keep the broth warm without boiling.

In another medium pot, start by cooking the leeks. Use a little oil or water so they don't stick and cook on medium-high heat for about 5 minutes or until soft. Then, add the garlic, cook for one more minute while stirring and then add the raw buckwheat. Stir and toast the seeds for 1-2 minutes.

Add the wine and stir well. Once the wine has mostly cooked down, then add a small amount of warm vegetable broth (about a full ladle, just enough to barely cover the buckwheat) and stir well. Keep cooking on medium heat while watching carefully. Once the buckwheat has absorbed most of the broth, then add another ladle-full and stir. Keep adding broth small amount at a time until the buckwheat is tender, but not mushy, just the same way you cook a classic risotto.

Combine and finish up

Once the buckwheat is tender, then add some salt, nutritional yeast and the roasted mushrooms. Stir well and add a little extra broth if it looks too dry. Then top with the spinach (it will seem like a lot!) and stir/cover until the leaves are all wilted, about 5 minutes.

When the leaves are soft, remove from the heat and taste to adjust saltiness. Also, adjust the finale texture by adding an extra splash of broth if needed so it is nicely creamy. I also like to add a few tablespoons of my vegan coffee creamer to make the risotto richer, but that's totally optional.

Serve and enjoy right away with a side of bread.

Making a buckwheat mushroom risotto is pretty forgiving and there are many different ways you can change up the recipe to make it your own.

You can definitely use a yellow onion instead of the leek and add some dried herbs, especially thyme, when cooking the risotto. But also, you can have fun and use all sort of different kind of mushrooms, such as shiitake, cremini, oyster or enoki.

While we are talking about mushrooms, it is worth mentioning that this recipe is kind mushroom heavy, which is amazing if you are a mushroom lover like I am. But if you prefer, feel free to use only half the mushrooms and include other veggies such as butternut squash, red pepper, asparagus, green peas, etc.

I did not have my fav vegan parmesan ready-to-go at the time I took the pictures (what a shame!). But if you can, it is worth the extra 5 minutes to make some. The almond parmesan adds nutrition, but also extra cheesy and salty flavor.

Also, when done roasting the mushrooms, try to keep a few apart on a plate before transferring them to the risotto so you can use the extra ones to garnish the bowls when serving (as seen in the pictures). It gives it a beautiful look!

This risotto is really loaded with flavor, so I found it at its best when served with a side of crusty bread (oh hello more carbs) to dip in the sauce.

Add some lemon wedges so you can squeeze some extra tangy juice over. It brightens up the meal and brings all the flavors together. Also sprinkle with fresh parsley or chives if you have any.

Classic risotto is known not to store very well and this is the same with this buckwheat version. The mixture simply absorbs all the creaminess and becomes firm as it chills. Thus, I do not recommend to make this recipe ahead.

If you end up with some leftovers, then you can reheat using the stove or the microwave, but you will have to add extra broth to make it creamy again. The overall texture will be much softer, but the flavors still will be great.

I hope you like this buckwheat mushroom risotto as much as we do! If you try it, please leave a comment below and rate the recipe to let me know how it was. Your feedback is so helpful! 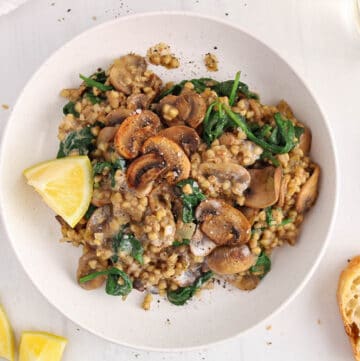 This creamy buckwheat mushroom risotto makes for such a fun twist on the classic risotto recipe! Loaded with nutrients, easy and so full of earthy flavors, this meal is great on nights where you are craving a filling and satisfying plate.
PRINT RECIPE PIN RECIPE
Prep Time10 mins
Cook Time20 mins
Total Time30 mins
Servings 4 people
Author Jessica Laroche