These baked vegan tofu egg rolls are actually much easier to make than it seems! Loaded with healthy veggies such as cabbage and carrots, plus they hold a fair amount of plant-based protein. They make for a fun appetizer, but can also be served as a full meal with a side of rice or veggies. Fully dairy-free and egg-free.

I haven't made my own egg rolls for a while and wow, they are SO much easier to prepare than what I remember. We made them 4 times in the last month, they are that good (ok, I made them a lot in such a short time mostly because I had to re-test them a bunch, but really, they are legit good).

My version of egg rolls are oven-baked as opposed to deep fried, which makes them so much healthier than the restaurant style.

Classic egg rolls are made with egg based wrappers and filled with meat, usually pork. But you don't need any animal products to make tasty egg rolls!

In this case, the savory Asian-inspired egg roll filling is loaded with fiber and rich in good-for-you ingredients such as cabbage, carrots, garlic and ginger. Just a little soy sauce to flavor and that's it. Ultra simple!

They really make you feel satisfied and full, plus they are pretty high-in-protein, thanks to the tofu, which makes these vegan egg rolls totally acceptable for dinner. And yes, they do get crispy even if oven-baked!

All you have to do is cook the vegetable and tofu filling in a pan, then use the filling to stuff store-bought vegan egg roll wrappers, roll and bake in the oven.

I have tested these egg rolls completely oil-free and although it was pretty good, they were not as crispy as I wished. We much preferred the version where I sprayed a small amount of oil over before baking. But this will be totally up to you.

I hope you enjoy this recipe! 🙂

Why you'll love this recipe

Which egg roll wrappers to use

Funny enough, "egg" roll wrappers are now often made egg-free. It is suspected that the modern egg rolls are a variation from a roll originally made using an egg omelette as the wrap, thus the name. But still, some wraps will include eggs, so look at the ingredient list to ensure that they are made completely vegan.

The egg roll dough that you can find in store mostly is made using wheat flour, water and salt. They are not gluten-free friendly (I haven't found a gluten-free + vegan egg-roll wrapper option yet). They come in pre-made flattened and sliced sheets already into the shape of circles or squares, just waiting to be stuffed, rolled and cooked.

I used the egg roll wrappers from Nasoya which I found at Hannaford. These wrappers are also usually available at Whole Foods.

The egg rolls wrapper from Twin Dragon are also vegan and I believe can be found in many large grocery stores (such as Walmart).

Simply look in the tofu section close to the produce in the fridge.

If you do want to make a gluten-free version of vegan egg rolls, then you might want to experiment with Vietnamese rice papers. In that case, you need to avoid baking them all together (just soften the paper with water before rolling) or consider deep-frying them.

Start by warming up some sesame oil in a large pan or wok. Then, crumble the tofu over and keep cooking while stirring often until it loses most of its water and turns slightly golden brown. Once cooked, transfer on a plate and set aside.

In the same pan or wok, add a little more sesame oil and warm it up. Then, add the onion and cabbage and cook for 7-8 minutes on medium heat stirring often. Once the cabbage is tender and mostly cooked, then add the carrot, ginger and garlic. Cook for 2-3 more minutes.

Transfer the tofu back to the pan and pour the soy sauce over. Stir and keep cooking on medium heat uncovered until the soy sauce is mostly absorbed/evaporated. Then, remove from the heat and set the pan aside to cool down.

While the egg roll filling is cooling down, prepare your rolling station: line a baking sheet with parchment paper and spray a small amount of oil over, if desired. Then, place a small bowl of water on the side. Also, pre-heat the oven to 400º.

Once the filling has cooled down, then start rolling: place an egg-roll wrapper in front of you on a clean surface with one of its corner facing down or towards you. Use your fingers to brush a small amount of water over the dough all around the wrapper along the edges (this will help seal the rolls) and then, place about 2-3 tablespoons of filling at the bottom of the wrapper.

Then, lift the bottom corner and fold over the filling. Fold both the right and left corners over and finally, roll to close up the egg rolls. Try to keep the roll pretty tight. Transfer on the prepared baking sheet with the fold down and keep going until you have no more of the filling mixture anymore. You should end up with about 14 egg rolls.

Once all the egg rolls are done and placed on the baking sheet, then I like to spray some oil over them for a crispier result, but that's optional. You could also brush a little melted coconut oil over, as long as you make sure to use a refined coconut oil to avoid a coconut-y flavor.

Bake in the oven for 20 minutes, flipping halfway through. They are done when they start to turn golden brown.

Serve right away with your favorite sauce.

The dipping sauce is as important as the egg rolls!

Not kidding, be sure to plan for or buy a sauce to dip them in. It is where the real fun is! I like to serve mine with my Asian orange sauce (as seen in the pictures).

A more traditional way to serve egg rolls would be to pair them with a Nuoc Cham Chay sauce. It is a Vietnamese dipping sauce that often includes fish sauce, but here is a vegan Nuoc Cham Chay recipe from "A Peachy Plate" that's very quick to make. Other sauce options include:

They make for an amazing appetizer, but also can easily be turned into a full meal. Pair them with vegetable fried rice, coconut rice, vegetable stir-fry or simply with a side of garlic steamed broccoli or quick kale noodles.

Our kids absolutely LOVE these vegan egg rolls, especially when served with a few sweet sauces to dip them in. They will ignore any side-dish whenever these rolls are on the table! They make for such a fun finger food for kids.

I love how versatile these are! You can really stuff them with all your favorite veggies, such as cooked:

Feel free to use a bag of already shredded cabbage/carrot mix. They'll save you some prep time. You can also include avocado, bamboo shoots, water chestnut, scallions and even cooked rice vermicelli noodles to add on some more fun texture. For extra flavor, feel free to add fresh basil, mint or cilantro too.

Store any leftovers in the fridge for up to 4 days in an air-tight container. They tend to lose some of their crispy texture while storing, but they usually don't turn soggy at all, which makes them great for meal-prep. Feel free to make the filling ahead of time, store in the fridge and roll + bake whenever you are ready to eat.

How to reheat egg rolls

If you make them ahead or simply have some leftovers you want to reheat, then I recommend you use the oven for best texture. Heat up at 400º for about 5 minutes on each side or until warmed through.

You could also quickly pan fried them until warmed up, they will definitely get crispier that way. Avoid the microwave if possible for best texture, but it still is a good option, especially if you bring them to work.

I hope you like these vegan tofu egg rolls as much as we do! If you try them, please leave a comment below and rate the recipe to let me know how they were. Your feedback is so helpful! 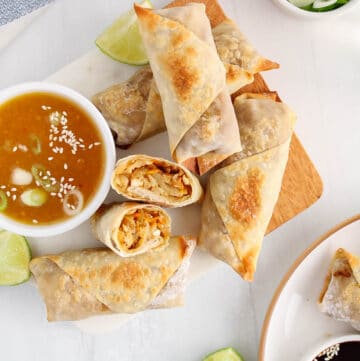 5 from 1 vote
These baked vegan tofu egg rolls are actually much easier to make than it seems! Loaded with healthy veggies such as cabbage and carrots, plus they hold a fair amount of plant-based protein. They make for a fun appetizer, but can also be served as a full meal with a side of rice or veggies. Fully dairy-free and egg-free.
PRINT RECIPE PIN RECIPE
Prep Time20 mins
Cook Time20 mins
Total Time40 mins
Servings 14 egg rolls
Author Jessica Laroche