These baked vegan apple cider donuts are easy-to-make and such an amazing treat to make in the fall! They are loaded with delicious warming spices and also nicely coated with a cinnamon sugary layer, although you can skip the sugar coat for a lower-in-sugar recipe. Also made dairy-free and without eggs.

Now that the fall is here to stay, then it's time to make some vegan apple cider donuts!

And they cannot be easier to make at home... it's pretty much like making spiced muffins, but using a donut pan instead. So simple!

These vegan donuts are filled with amazing fall spice flavors, they are nicely tender and moist and also baked in the oven instead of deep fried. The combo of cinnamon and nutmeg feels like getting a cozy warm hug and we absolutely loved the crunchy cinnamon sugar crust that adds so much texture and flavor.

The apple cider brings a subtle sweetness naturally, some hints of apple flavor and also just enough acidity to help fluff the donuts nicely and make them lighter. You can also use any fresh-pressed apple juice if that's easier or if you are not making them during apple season, although the real thick and dark apple cider is going to bring you the best flavor!

Enjoy with a nice cup of warm tea such as a matcha latte or a lavender milk tea. Or even better, make yourself a warm cup of apple cider to pair them with for the ultimate cozy treat. Such a nice dessert recipe to make in the fall!

Hope you give them a try! ❤️

Highlights of this recipe

Then, in a medium bowl, combine the ground flax seeds with the water and let it sit for about 5 minutes. Then, add the melted coconut oil and room temperature apple cider and whisk well.

Pour the wet over the dry and stir to combine.

Transfer the batter equally into your donut pan (makes for 6 large donuts). Then, bake for 13-15 minutes.

Once done, let the donuts slightly cool down in the pan for about 5 minutes, then gently unmold them. For me what works best is to gently knock the pan upside down on the counter until they fall off, but you can also use a knife to help unmolding them. Just be careful not to break them, especially when still warm and delicate!

Combine extra coconut or brown sugar with cinnamon in a medium shallow bowl.

Then, cover the donut with melted coconut oil or more apple cider (or spay avocado oil over, you just need a sticky factor) and then cover with the sugar mixture.

Watch how I make them

These donuts definitely feel more fresh and simply are better the same day they are made. Over time, the oil and sugar coating will be absorbed by the donuts and will change in texture. If you can, try to eat them within 24 hours, which I'm sure will not be a problem!

If you want to keep them for longer, then cover them well and keep them at room temperature (transfer in the fridge after 24 hours though). I would recommend to slightly warm them up for a few seconds in the microwave before enjoying them, especially if they were in the fridge. The coating will change after that, but they will stay pretty good still!

Can I make them oil-free?

I haven't tried it yet, but I'm thinking that the coconut oil could be swapped for apple sauce. The donuts might be more dense though. Also, simply use more apple cider to coat the donut before tossing in the sugar.

Can I make them gluten-free?

This 1:1 gluten-free flour from King Arthur usually is a great replacement to regular flours when baking gluten-free.

Can I turn this recipe into muffins?

Yes! They fluff nicely, so be sure not to fill the muffin tins to the top (I would aim to fill them to about ¾ full) and I'm expecting that you will need to bake them for a little longer, about 18-20 minutes. Check for doneness using a toothpick: it should come out clean!

I hope you like these vegan donuts as much as we do! If you try them, please leave a comment below and rate the recipe to let me know how they were. Your feedback is so helpful! 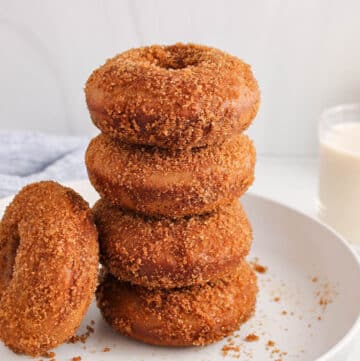 These baked vegan apple cider donuts are easy-to-make and such an amazing treat to make in the fall! They are loaded with delicious warming spices and also nicely coated with a cinnamon sugary layer, although you can skip the sugar coat for a lower-in-sugar recipe. Also made dairy-free and without eggs.
PRINT RECIPE PIN RECIPE
Prep Time10 mins
Cook Time14 mins
Total Time24 mins
Servings 6 donuts
Author Jessica Laroche